Reflecting on the Importance of The Workplace

Is the Workplace Dying?

Have we reached “peak office” by pushing too hard for remote commuting and flex schedules? Many companies have had recurring conversations about options for their staff. These are usually followed by some survey or other about the rise of flexible working or a case study of a workplace devoid of desks (or, more likely, one in which none are pictured). Of course, the actual conclusion we can draw from such things is that the office as we once knew it is now dead or mutating into something else, but that’s true for every aspect of modern life. The constant factor that ensures offices will always exist, in some form or other is the humans they serve.

Studies have shown that people communicate less well the greater the physical distance between them. But recent research from Stanford University reveals how the very idea of “togetherness” can have a significant impact on the way we perform. Proximity to one another can actually fuel intrinsic motivation.

When we work as part of a team, we are significantly more motivated and performed better than when we work in isolation from others.

This attachment and motivational drive is starting to be applied in office designs around the world. The gains from a feeling of togetherness can be significant. In the Stanford research individuals who were told they were working together persisted from a half to two-thirds longer on solving a challenge than those who believed they were working alone, while also reporting they were more interested in the task, generally performed better in its completion and even showed less signs of fatigue. They also appeared to become more generally engaged in their work. The subjects who believed they were working in a team completed 53 percent more related tasks when asked to do so two weeks later.

Design for Today, Tomorrow, and Together

Office workspaces today compete with a host of flex office options like telecommuting, the gig economy, and Millennial freedoms. But physical structures still yield significant gains from collaboration. The world’s tech giants have embraced the togetherness model and created atmospheric campuses to foster engagement. Google, Apple, and Madison-based Epic Systems have all invested in one-of-a-kind offices to not only impress  prospective employees, but also maximize opportunities for encounters.

Now there’s a lesson there for those who still think the office will ever become unnecessary.

At InteriorLOGIC, we build work environments. From our home office in Madison, WI our award-winning commercial interior design team focuses on creating spaces that work. We continually work to improve the end user experience with each design and our team is well-suited for challenging projects including LEED certification and sustainability projects. For more information about our business and approach, please visit www.intlogic.com.

Our Clients Are Our Top Priority

As we all navigate the Safer-at-Home order, we are committed to serving you on your current and upcoming projects.

We are open for business with our staff temporarily utilizing remote conferencing for all project meetings.

It’s a good time to remember, we are all in this together. 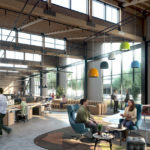